Home » 6 Triggers That Cause Procrastination 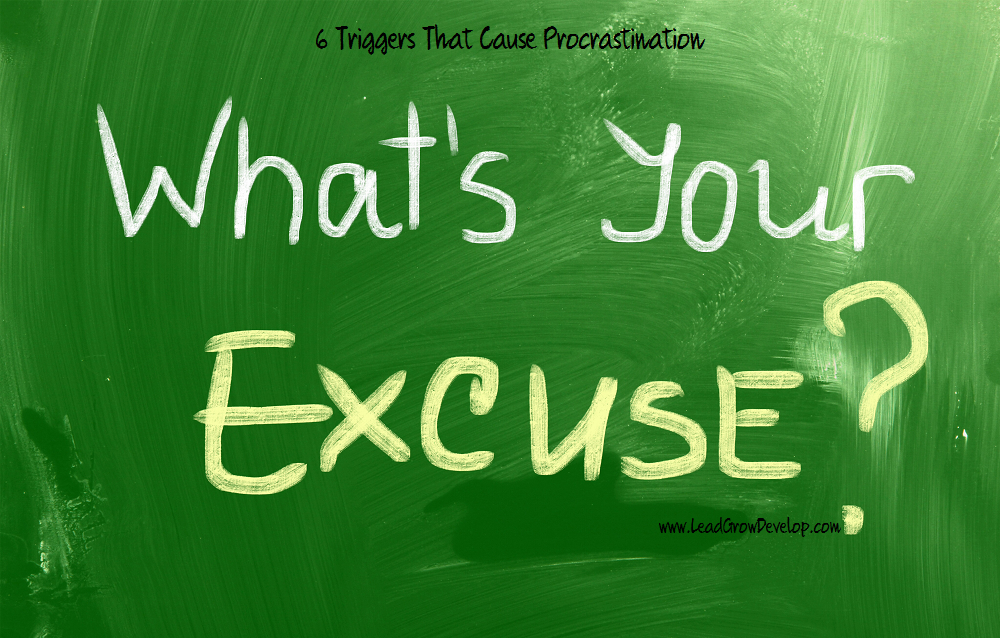 Procrastination is the gap between what we intend to accomplish and what we actually accomplish.  Why do we procrastinate?  If it is something that we “intend” to do, shouldn’t it mean that it is important enough to want to accomplish it?  Yet, we procrastinate all the time. When the task has a deadline, we sometimes wait until the last-minute to get started.  The advantage of having a deadline is that it sounds a silent bell in our heads warning us to get it done.  When there is no deadline attached, this bell sometimes never goes off, causing procrastination to last even longer.

I have been procrastinating all week on writing.  Work has been so hectic, that it’s been hard to find energy for anything else.  Take this blog post, it wasn’t even the original subject that I wanted to write about.  I procrastinated so long that I decided to try to find ways to stop procrastinating.  So instead of sitting down and starting, I procrastinated by learning about procrastination.

I am writing this post on Saturday to be published on Monday.  I had the whole day planned out.  I would wake up, prepare breakfast for myself and my boys then write for about 2 hours.

When I looked at the clock, I realized that if I didn’t get going, I wouldn’t finish this post on time.  Today was my only available day in the week-end to write and I didn’t want to miss my Monday deadline.  I try to be consistent when it comes to posting (Mon-Wed-Fri) or (Mon-Thurs).

Is procrastination a struggle for you?  Turns out, you are among many.  Tim Pychyl, a procrastination researcher at Carleton University in Ottawa, Canada, has been studying procrastination for over 20 years.  You can find Tim’s blog posts on Psychology Today.  In his research, he identifies a number of task characteristics that make you more likely to procrastinate.

Here are 6 Triggers that Cause Procrastination:

For obvious reasons, if a task is deemed to be boring, there is no motivation to get started.  Housework falls into this bucket for me.

Depending on what the project is, sometimes the fact that it is difficult can be a motivator if it is coupled with an intrinsic reward.  If there is no perceived value in accomplishing the task, then the fact that it is difficult can lead to procrastination.  In University, no matter how hard I tried to understand it, programming was super hard.  I don’t even know why I decided to take it as a Minor in school.  I procrastinated all the time in getting my homework done until I realized I was better off choosing another Minor to invest my time in.

If it has no personal value, you might want not only to put it off but take it off your list completely.  If it is not important, it might not be worth doing.

When you don’t know how or where to start, it can be a source of procrastination.

When tasks are not concrete or there is no structure to them, it can make you keep delaying it until you either try to get structure or until you have no choice but to accomplish it.

The idea is, in understanding the triggers that are causing you to procrastinate, you can begin to find ways to combat them.  Next time you put off performing a task write down what triggered this behavior.

I am not sure where procrastinating on writing my posts falls into.  I don’t even feel it belongs into one of the 6 triggers above.  In my opinion, it is more of a temporary lack of energy than anything else.  It has been a demanding month for me that most of my energy was spent taking care of work and family priorities that there was few remaining for anything else.  What do you think?

What triggers do you face most often?