Home » A Different Look At The Definition of Courage?  #5MinMotivation 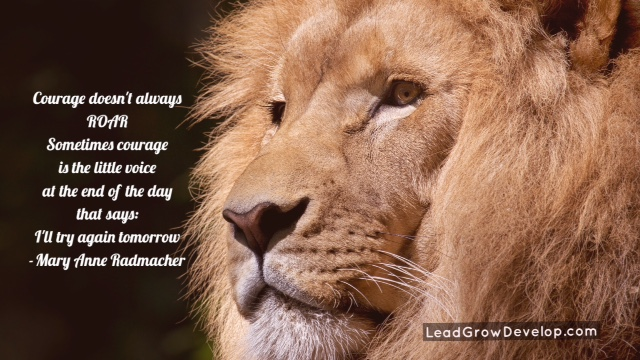 There are many stories that one can find in history about courage.  In today’s #5MinMotivation, I aim to get you to think of what courage means to you.  Even more than that, to inspire a new definition of courage into every one of us.

Merriam Webster defines courage as, “the ability to do something that you know is difficult or dangerous”.  When we think of courage, we think of grand examples of courage that helped define a character, or even history.

If you haven’t heard of John Stephen Akhwari, then take the time to read an amazing inspirational story of courage and human spirit, reported on the Olympics website:

The Olympic Games, Mexico, 1968. The marathon is the final event on the program. The Olympic stadium is packed and there is excitement as the first athlete, an Ethiopian runner, enters the stadium. The crowd erupts as he crosses the finish line.

Way back in the field is another runner, John Stephen Akhwari of Tanzania. He has been eclipsed by the other runners. After 30 kilometers his head is throbbing, his muscles are aching and he falls to the ground. He has serious leg injuries and officials want him to retire, but he refuses. With his knee bandaged, Akhwari picks himself up and hobbles the remaining 12 kilometers to the finish line. An hour after the winner has finished, Akhwari enters the stadium. All but a few thousand of the crowd have gone home. Akhwari moves around the track at a painstakingly slow pace, until finally he collapses over the finish line.

It is one of the most heroic efforts of Olympic history. Afterward, asked by a reporter why he had not dropped out, Akhwari says, “My country did not send me to start the race. They sent me to finish.”

If I were to define the character traits that it took for John Stephen Akhwari to keep going when officials and even his body were telling him to stop, courage would definitely be one of them.   For Akhwari, it wasn’t about the win any more.  It was about finishing what he came to Mexico to do.  It was about proving to himself and his country that he would cross the finish line, no matter what.

There are many other displays of courage that are not as Bold.  Examples that are not written in history books or talked about in Social Media.  There is a courage within each of us, within YOU.  The courage it takes to keep going during those moments when it is easier not to.

YOU, never giving up on that goal, no matter what.  The courage to tell yourself that every day,

“You did not start those goals not to finish them”.

Courage to keep performing those small actions consistently despite the setbacks.

“Courage does not always roar. Sometimes courage is the quiet voice at the end of the day saying, ‘I will try again tomorrow.” ― Mary Anne Radmacher

This week, what will you commit to being courageous about?