Home » Your Greatest Weapon To Respond, Not React #5MinMotivation 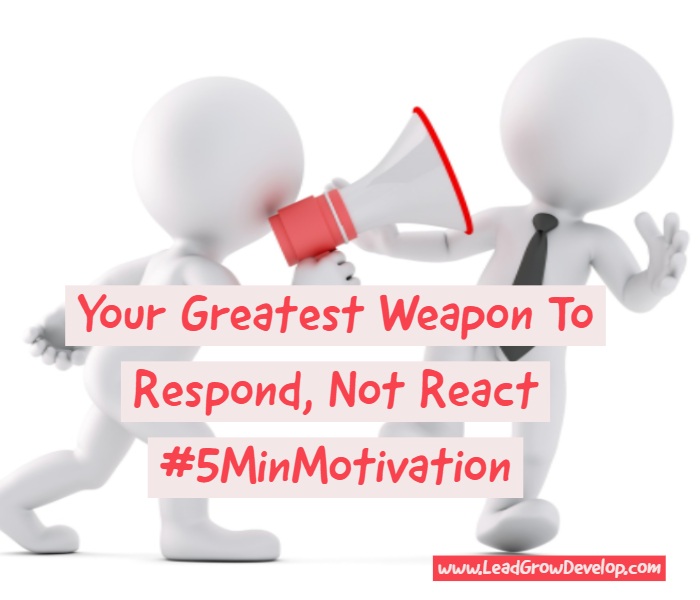 There are a lot of situations from my past that could have been avoided if I had responded instead of reacted.  If you look at some of today’s headlines, it is filled with examples of how people reacting through their emotions lead to some questionable decisions and strong consequences.

The Twitterverse is full of examples of people reacting instead of responding.

Several of my arguments with my husband are great examples as well.

Reacting is instinctual.  Responding is a conscious choice.  Sometimes that choice is buried beneath too much instinct.

The idea is that when you are confronted with a trigger, you become aware of your reaction, resist doing anything right away, and then make a conscious choice on how to respond.  However, this is not always easy to do.  If it was then it wouldn’t be a problem.

“The environment around you shapes who you are. How you handle an emergency or how you react when someone is rude to you, that’s you.”   Halsey

I read a Bible story the other day that gave a solution to teach you how to better respond.  Whether or not you are religious is not important.  There are still lessons you can learn from most stories whether or not religion is involved.

“Jesus went to the Mount of Olives. Early in the morning he came again to the temple, all the people came to him, and he sat down and taught them. The scribes and the Pharisees brought a woman who had been caught in adultery, and placing her in their midst they said to him, ‘Teacher, this woman has been caught in the act of adultery. Now, in the law, Moses commanded us to stone such. What do you say about her?’ This they said to test him, that they might have some charge to bring against him. Jesus bent down and wrote with his finger on the ground. And as they continued to ask him, he stood up and said to them, ‘Let him who is without sin among you be the first to throw a stone at her.’ Again he bent down and wrote with his finger on the ground. But when they heard this they went away one by one, beginning with the eldest, and Jesus was left alone with the woman standing before him. Jesus looked up and said to her, ‘Where are they? Is there no one to condemn you?’ She said, ‘No one, Lord.’ And Jesus said, ‘Neither do I condemn you; go, and do not sin again.” (John 7:53-8:11).

When Jesus was challenged, what was his response?  He didn’t answer the crowd immediately.  Instead, he wrote on the ground.  He paused.

If we learned to pause before responding, we can choose to become more intentional about what we decide to communicate.  Pausing not only gives you time to digest the information but take some time to breathe before reacting if the information becomes a trigger for anger.

Words are only part of the message.  Your non verbal cues can speak louder than your words.

Next time you are faced in a tough situation, take a pause and choose your response.