Home » The Stone In The Road: A Lesson In Facing Obstacles #5MinMotivation 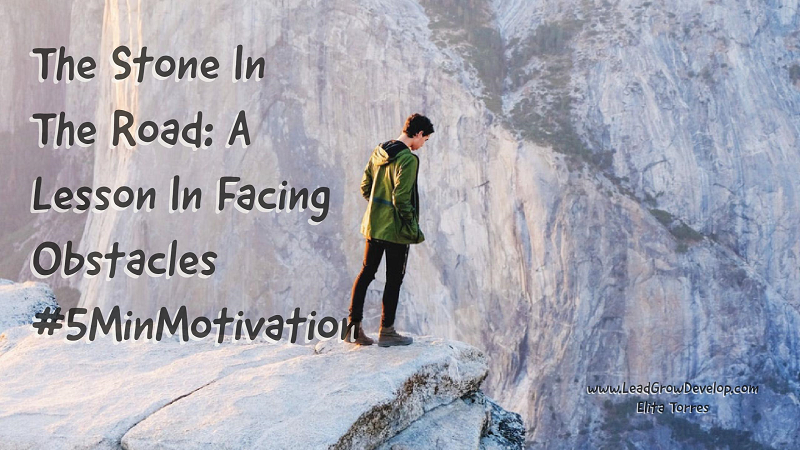 You won’t always like the cards you are dealt.  You cannot always control how many resources are made available to you.  Every time you are faced with an obstacle on the road, you have a choice.  A choice to look at that obstacle, do nothing and grumble.  Or, to choose your behaviors and take action to remove the obstacle.

The way you face a challenge goes a long way in determining how you win that challenge.

If you choose to blame your problems and failures on circumstances or people, you are doomed to keep complaining about the same types of problems.

The important thing is that mind-set can be learned.

The following story teaches a lesson in the advantages of taking action on what is blocking your path.

The Stone in the Road

There is a story told of a king who lived long ago in a country across the sea. He was a very wise king, and spared no effort to teach his people good habits.  Often he did things which seemed to them strange and useless; but all that he did, he did to teach his people to be industrious and careful.

“Nothing good can come to a nation,” he said, “whose people complain and expect others to fix their problems for them. The good things of life are given to those who take matters into their own hands.”

One night, while everyone else slept, he placed a large stone in the road that led past his palace. Then he hid behind a hedge, and waited to see what would happen.

First came a farmer with his wagon heavily loaded with grain, which he was taking to the mill to be ground. “Well, whoever saw such carelessness?” he said crossly, as he turned his team and drove around the stone. “Why don’t these lazy people have that rock taken from the road?” And so he went on complaining of the uselessness of others, but not touching the stone himself.

Soon afterward, a young soldier came singing along the road. The long plume of his cap waved in the breeze, and a bright sword hung at his side. He was thinking of the wonderful bravery he would show in the war. The soldier did not see the stone, but struck his foot against it and went sprawling in the dust. He rose to his feet, shook the dust from his clothes, picked up his sword, and stormed angrily about the lazy people who had no more sense than to leave such a huge rock in the road. Then he, too, walked away, not once thinking that he might move it himself.

So the day passed.  Everyone who came by complained and whined because the stone lay in the road, but no one touched it.

At last, just at nightfall, the miller’s daughter came past. She was a hard-working girl, and was very tired, because she had been busy since early morning at the mill. But she said to herself, “It is almost dark. Somebody may fall over this stone in the night, and perhaps he could be badly hurt. I will move it out of the way.”

So she tugged at the heavy stone. It was hard to move, but she pulled and pulled, and pushed, and lifted until at last she moved it from its place. To her surprise, she found a box underneath. She lifted the box. It was heavy, for it was filled with something.

Upon it was written: “This box belongs to the one who moves the stone.” She opened the lid, and found it was full of gold! The miller’s daughter went home with a happy heart.

When the farmer and the soldier and all the others heard what had happened, they gathered around the spot in the road where the stone had been. They scratched at the dust with their feet, hoping to turn up a piece of gold.

“My friends,” said the king, “we often find obstacles and burdens in our way. We may complain out loud while we walk around them if we choose, or we can lift them and find out what they mean. Disappointment is usually the price of laziness.” Then the wise king mounted his horse and, with a polite “Good evening,” rode away.

Who will you choose to be in this story?  It will make all the difference.