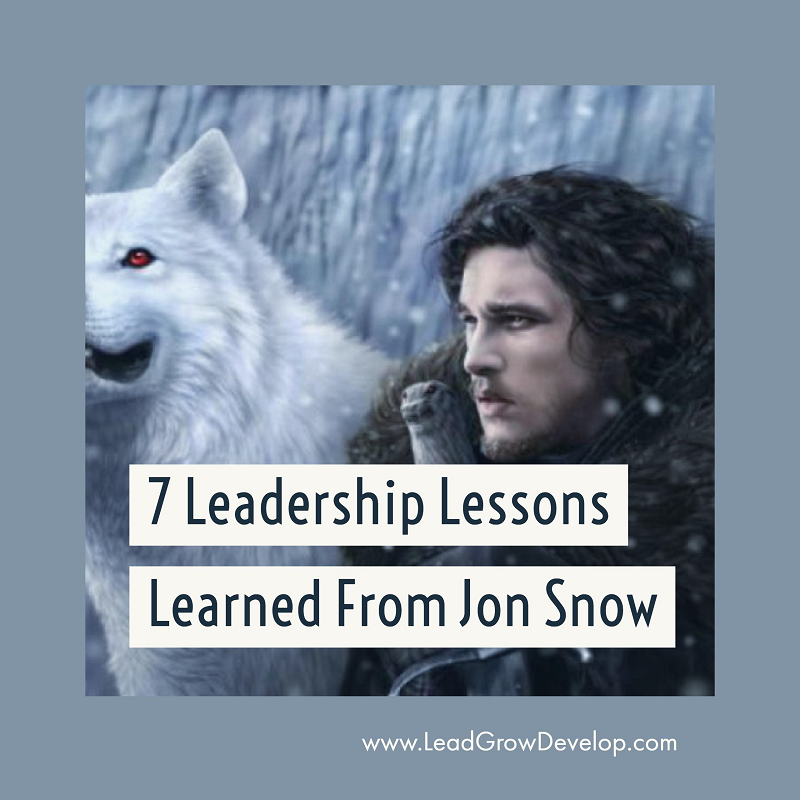 Why has Game of Thrones captured the hearts of so many?  For me, it started with the novels and continued on through the HBO series.  I think that we can all see a part of our struggles in one of the characters.  Their journey can be a metaphor for some of our battles, losses and wins.  There are scenes that result in simple entertainment while other scenes teach great lessons.  Jon Snow, one of the most popular characters, can teach us some important leadership lessons that we can all learn from.

Jon wasn’t one of my favorite characters from the beginning.  Actually, my early favorites are mostly all dead.  What Jon did was make mistakes, several of them in fact.  But, he also learned from his failures resulting in one of the strongest character growths in the series.

That is a huge part of what leadership is all about, being humble and open enough to learn from mistakes and then, turning them into opportunities.

It’s Not About Your Position

Jon Snow was brought up believing that he was born from an affair between his father, Ned Stark, and a woman he never meant, giving him the name of Snow.  Born with this name, he had no rights and would gain no titles.

When he was old enough, he joined the Night’s Watch.   As a brother of the Night’s Watch, Jon knew his bastard status would be put aside, and for the first time in his life, he would have the chance to make a name for himself, a name without the word ‘bastard’ attached to it.    Eventually, he ends up becoming Lord Commander, leaving the Watch (which no one is allowed to do) and becomes King of the North.

He became a King not because of his title, nor because it was his birth right.   He became a leader because his people wanted to follow him.

Leadership is not something you are given.  You may be given a title or a management position, but this does not automatically mean you are a leader.  Leaders don’t need titles to positively influence.  If you are given the responsibility of a title, become a leader who earns this title daily through the development and mobilization of your team.

Doing What is Best is Not Always Popular

Jon’s people betrayed and killed him because Jon was seen to be making peace with the Wildlings, the sworn enemy of the men in Castle Black.  He knew that aligning the Night’s Watch with the Wildlings would not be popular but felt it was the best for The North.  He went forward with what he felt was best for his people although they didn’t see it themselves.

As a leader, you will be forced to make tough decisions on a regular basis.  Whether it’s cutting back on payroll or having that difficult conversation about performance, leaders find themselves sometimes having to make unpopular decisions.

Your job as a leader is to sometimes make those unpopular decisions in the hopes that it will lead to better results for the company and your team.

Understanding the Importance of Your Network

What Jon Snow understands well, is that he cannot achieve his goals alone.  From aligning the Night’s Watch with the Wildlings, to joining forces with Daenerys, his focus is often on strengthening his alliances and building his network.

Successful CEOs and Leaders who build a solid network find solutions to problems easier through partnerships.  Reach out to a colleague or a mentor if you find yourself without a solution.  They may help you see things in ways you haven’t thought of before.  If you want to keep your network strong, be willing to share your best practices with others and add value where you can.

“When the snows fall and the white winds blow, the lone wolf dies but the pack survives.” Ned Stark

Invest in Your People and Create a Common Vision

One of the reasons he was able to gain the respect of so many, comes from his respect and belief in others.  Snow understands that winning takes strength from everyone on the team and he often finds others’ strengths and encourages them.  That is why he suggested that Sam pursues becoming a Maester.  It is also why he was able to convince the Wildlings and the Night’s Watch how much stronger they would be together.

He understands what each member of the team can bring and harnesses those strengths to succeed.  He also united them towards a common vision, “to rid the world of the Knight King”.  This vision and goal became so strong that long time enemies found themselves fighting side by side.

One of the most important investments you can make as a leader besides investing in yourself is your investment in your team.  An effective leader makes time for those developmental discussions with team members and leverages their strengths to achieve greater results.

Lead your team towards a clear vision and make that goal so clear that it becomes the center of every other company goal.

Jon and Tyrion come up with a plan to convince Cersei and Daenerys that the White Walkers are real.  They decided that the best way to convince them is to head over to the North and capture a White.  Who does Jon send to lead this group of daring men?

He could have sent any of his men towards danger but didn’t want to ask his men anything that he was not willing to do himself.

One of the best ways you can build trust with your team is to lead by example.  Your actions should match your words.  Your employees will learn more from what you do then what you say.

“The man who passes the sentence should swing the sword.”  Ned Stark

Jon Snow was often faced with the consequences of his own mistakes.  This, I believe led him to accept the mistakes of others.  In the finale, he was confronted by Theon Greyjoy who betrayed Jon’s family.  During this face to face, Theon explains that he struggled to decide who he really was, a Stark, the family who removed him from his home as part of a treaty, or a Greyjoy, his bloodline.  This led him to betray the Stark family who was always good to him in order to prove he was a Greyjoy.

Jon, despite the betrayal forgives him and tells him that he doesn’t have to choose.  He could be both, a Greyjoy and a Stark.

The real measure of your leadership does not occur when things go right.  Your leadership only really gets tested when times are tough, when your people make mistakes, when your running out of resources.  How you react during these times will determine how quickly your company or team bounce back from mistakes.  Will you help get your team through the tough times or help them learn from their mistakes?

Accept you Don’t have All the Answers

When Ygritte, one of the Wildlings cries over a song, Jon questions why she was crying.  Her reply to his consoling her, “You know nothing Jon Snow”.  This saying has become one of Game of Thrones most popular quotes.

Being the leader, doesn’t mean you have all the answers, nor does it always make you right.  Be humble and open to learn from all sources.  Rely on the expertise of more experienced colleagues and gain insight from those closer to the front lines.

A leader does not have to be the fastest or smartest.  A leader is one who inspires their team members to become their best self.

What important leadership lesson have you learned?

One thought on “7 Leadership Lessons Learned From Jon Snow”